On Friday the 13th (unlucky for some!) Tir Coed tutors braved the wintery weather to celebrate the success of the VINE project, learn more about the recently launched LEAF pilot project and be updated on health and safety and accreditation developments.

Due to the snowy and blustery weather there was a much smaller group than usual but it was great to get together and have a good catch up after the festive period. 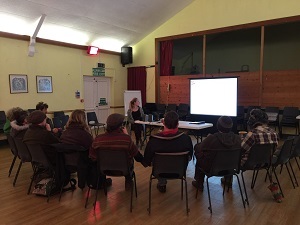 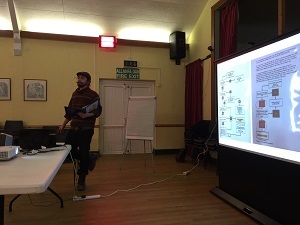 Ffion began by presenting on the hugely successful VINE project, thanking everyone for their part in making the project such a positive experience for almost 3000 people and in improving three public access woodland sites for the benefit of the wider communities.

Over the past 2 years the tutors have been very involved in developing Tir Coed’s next major initiative –LEAF and Ffion was pleased to announce that funding had been secured for a year-long pilot project that commenced in December with the first of 6 training courses commencing in January 2017. A discussion was had about the brand new elements of the project such as the intensive training weeks and how to promote the LEAF provision during bespoke activity sessions and introductory training courses. 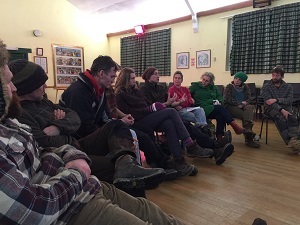 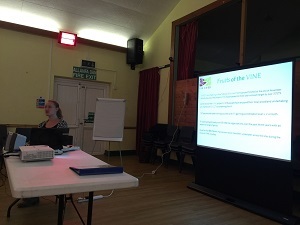 Following that Angie gave a presentation on Tir Coed workbook and accreditation developments with an interesting discussions following. Joe (Tir Coed’s newly appointed Ceredigion coordinator) then went on to talk through the Health and Safety files for each site and the new procedures that are in place.

Each of the tutors were then presented with their certificate of training in ‘Risk Management for Supervisors’ following the successful health and safety refresher course held in November 2016.

Thank you to everyone who came- we look forward to continuing to work with you in 2017. 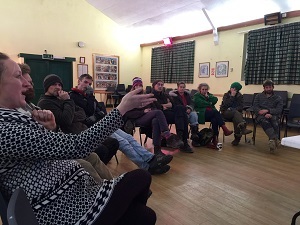